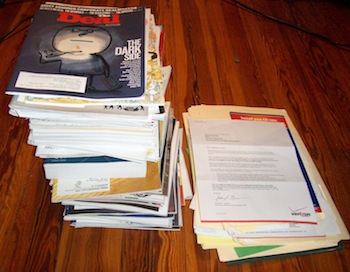 On the left is the “read” pile while on the right is the “do” pile. What I’ve learned over the last three weeks is that there are a lot of things going on that will try and take your time away from you. One of the skills I didn’t have when I started was the ability to say “no” I won’t get involved with that. At times it hurts as there are a lot of great things going on. Startup Weekend is getting ramped up and there’s always meetups and events to go to. At some point I realized that my time is better spent getting my shit straight. I’m having to make some tough choices as you can see. Things I want to do (read) vs things I need to “do”. I can do all of them and suck at each of them or I can focus on one or two and rock ’em. So here’s a hint, keep the “need to do” pile at a minimum and the “want to do” pile growing.

Also, the company is formed and I’ll be ready to announce it next week. I’d do it now but then everyone would go to the website – which isn’t ready yet. One thing I screwed up: I formed it as a straight C-Corp instead of an S-Corp. Since a C-Corp is susceptible to double taxation (but at this point 2 x $0.00 = $0.00 anyway) I wanted to form it as an S-Corp so that the tax liabilities pass through to the stockholders. I’ll fix that next week, when I go for and seed round of funding I’ll look again at moving it to a straight C-Corp. Not really a bit issue at this stage.