Home Innovation Dinner and a Movie

Dinner and a Movie

I’m not sure who at Cobb Theaters put “dinner” and a “movie” together but I freakin’ love Cinebistro! The service program is a little awkward and you don’t have a lot of time to get seated and order, but I appreciate the convenience of the overall concept. The theater in 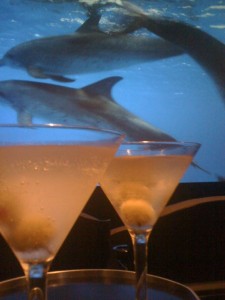 Tampa is well designed and the seats are big enough to sink into and relax for a couple of hours. It’s not cheap as dinner is usually running us about $80 and the tickets are about $17. The real advantage is that, as I’m sure I’ll inevitably get dragged to yet another Twilight movie, I don’t have to deal with screaming 10 year olds. Yes, I will pay extra for this benefit, as well as ordering two martinis so that they’ll last me through the entire movie.

What really impressed me was the technology. The wait staff walks around with a POS system with hip mounted printers as you pay for dinner when you order. When I was working to implement a large deployment of new POS systems in the mid-90’s they were enormous, so I can appreciate the progress made since then. Even though it’s only a printer it still makes things substantially more convenient. I’ve also seen similar deployments on flights that have arrived late to the gate. For those that need it, the flight crew can now print boarding passes so you can make your connecting flight.

The other thing I can really appreciate is the idea that someone at Cobb took “dinner and a movie” literally. We’ve been saying this for years but I’m curious as to the organizational process that made an upscale experience like this a reality, especially with the economic situation over the last couple of years. And by the way, the staff is always friendly and patient, even though I’m sure they’re stressed to get the orders in and back out as they stop service when the trailers stop. I definitely recommend trying this out if there’s one near you. Now if they’ll only give me an alternative to Flash navigation so I can see what the showtimes are on my iPad.