After digging through Guy Kawasaki’s book The Art of the Start again I realized I had something ass backwards. I was getting lost in writing the business plan and losing focus. In Chapter 4 Guy writes that you should write the business plan after you write the pitch. This is great advice – because now I’m not cramming a bunch of crap that a) nobody is going to read and b) …  No need for b), if nobody is going to read it then you shouldn’t write it. Writing the pitch first let’s you clearly see what points your trying to get across and in what order. So today I spend about 3 hours writing the pitch. It’s about 15 slides and still needs some editing. I doubt I can get it to 10 slides but It’ll be close.

All this got me thinking – if I forgot to write the pitch first, what else am I forgetting? I took another 90 minutes or so 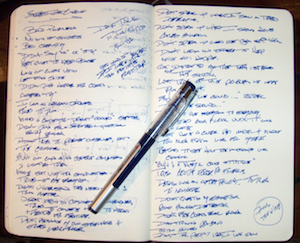 and wrote down all the mistakes I’ve made with other ventures. So here it is. You might be able to make out some of them. They range from “bad partners” to “Focused too much on what we could do rather than what we should do.” In terms of “bad partners” that stems from a small investment fund I put together when I was 23 to invest in internet stocks. This was 1992 and when someone said they were a “high-roller” I believed them. That was dumb. I found out later that he was with Amway. Bullshit detectors had clearly not started to form at that stage for me. For “Focused too much on what we could do…” I didn’t put a stop to endless feature creep when I should have. This was a few years later and the product got unwieldy and was just too much to deal with. Other examples of where I bombed were “Not calling someone on their bullshit” when I should have. It may have saved a few people and a lot of embarrassment for others. If people make absurd statements then it’s your responsibility to make them prove it. There’s about 20 examples in the picture but the final one I’ll cover is “Tried being everything to everybody.” My mistake on previous products was to put in tons of “stuff” and have something for everyone. I don’t think most of it ever got used. All the time that was spent creating it could have been used make the one or two really important features bulletproof. I really lost track of what problem I was trying to solve. So every week or so I’ll review the list, just to make sure I’m not repeating old errors.